The project aims to build a framework for computer games in Prolog. This language is not a typical one for implementing games. Although, as language of logic programming it can describe rules very well. And rules are the building blocks of games. In addition, the following things comming out of the Prolog world are very helpful building games:

So it seems valuable to try out this things for gaming. If a working prototype can be done then this technology may be the base for bigger projects. But in the first step, trying out things by building a small adventure game.

Despite beeing a experiment it shall be a playful game. It should not be seen as a competitor to good Indie games or commercial games, of course.

The ECLogicPlay is intended for building adventure games or role playing games. This reason is that telling stories is an important and ground theme of games I deal with. Graphics is not the first part as this project want to build a prototype. The resulting game shall have this properties:

The architecture (see diagram “Elements”) will contain a block controling the roles acting in the game. There is a simulation computing the development of the world. Thats done by applying rules to the current state of the world, which results in the next state. The Block Script includes the computation of the overall story line, which is influenced by the autors. To save game state, character data and other things is task of the Persistence.

The approach has some special properties:

The source code will be here in GitHub available. Requirements and Userstories and other informations will be stored in the GitHub project ECToBeTerranerRQ. Implementation will be done in SWI-Prolog, the JavaScript part may be coded in P5.js. But there is no final decision yet. I personally have experience with the “mother project” Processing, of P5.js. Therefore beginning with this may a good start.

the following deployment diagram can be drawn. SWI Prolog has a built-in predicates for creating a web server. In this way Prolog can implement HTTP directly. 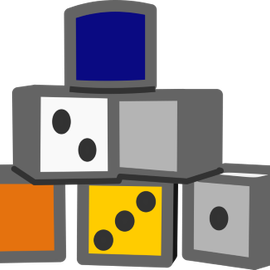